This is a myth.  I don't use some of them, the expensive ridiculously high commissioned restrictive poorly performing ones.  But I agree with the authors of the article below:  I neither like nor dislike "annuities" as a class because they are a widely divergent collection of financial tools.  Some are indespensible and some are useless.  It just depends on your goals.


By John L. Olsen and Michael E. Kitces | November 06, 2019 at 03:32 PM
As advisors who often talk about annuities to financial advisors, we are often asked whether we “like” annuities. To that question, our standard answer is that we neither like nor dislike them—because they’re just tools, which work well in certain circumstances and do not work well in others. Occasionally, that response will elicit what may appear to be a better follow-up question:
“When—that is, in what planning situations—does an annuity make good sense and when does it not make good sense?”
That’s a core question, and one that might be in the mind of you, our reader. What’s our answer? One answer might be that “it depends… on the specific facts and circumstances of the case.” That’s a reasonable and rather obvious reply, and what our audiences often expect to hear. But it’s not our answer.
Our answer to that question is that the question in unanswerable—until we know what the questioner means by an annuity in the first place. Are we talking about a variable deferred annuity or a fixed immediate annuity? Those contracts are hugely different.
Each is an “annuity,” but the two contract forms are designed to meet completely opposite needs. Generalizations, always hazardous, are especially unproductive when used with annuities. A true statement about fixed annuities is likely to be false when applied to variable ones, and vice versa. The same is true when the annuities are immediate versus deferred. Yet many, if not most, consumers—and all too many advisors—routinely generalize about annuities, often to the extent that their conclusions are so flawed as to be worthless.
If we bear in mind this caveat—that we must generalize only when our assessment can be generally accurate—can we now attempt to answer the question posed earlier: “When, and in what planning situations, does an annuity make good sense and when does it not make good sense?” We believe that we can, and should, construct bright line tests to help us determine when an annuity is likely to be suitable for our client.
1. Where the Goal Is Immediate Income
When immediate income is the primary goal, an immediate annuity may be appropriate, so long as it is understood that it may provide no benefit at the annuitant’s death. Indeed, if the annuitant lives beyond the point where any refund element is payable, an immediate annuity will not provide any death benefit.
2. Where the Goal Is Income in the Future
Where the goal is income in the future, several annuity strategies may be appropriate.
3. Where the Income Amount Must Be as High as Possible on a Guaranteed Basis
Where the primary goal is income and where the amount of that income must be as high as possible on a guaranteed basis, an immediate annuity is ideal. The key word, here, is guaranteed, given that other alternatives (e.g., portfolio-based strategies) merely have the potential of generating greater retirement income, but the investor/retiree cannot be fully assured that they will.
Where the income period is a fixed number of years, a Period Certain fixed immediate annuity will generally provide a greater amount per year than can be assured from any investment alternative because the non-annuity alternative must often preserve principal.
4. Where the Goal Is Accumulation of Capital
Where the goal is capital accumulation, an immediate annuity is clearly not suitable, but a deferred annuity may be. If preservation of principal is a requirement, a fixed deferred annuity might be appropriate, but a variable one, in the absence of a Guaranteed Living Benefit rider, might not. This is because a variable annuity, except to the extent that its cash value is invested in the fixed account, does not offer safety of principal.
If, however, the purchaser is willing to regard a return of purchase payments in installments, no matter what happens to policy earnings, as a guarantee of principal, a Guaranteed Minimum Withdrawal Benefit (GMWB) rider to a variable deferred annuity can serve as an instrument for capital accumulation with “safety of principal.”
Indeed, the GMWB provision of many contracts includes a step-up feature that not only assures the return of the original investment in installments, but also any contract gain accrued as of the point where the step-up option may be exercised. However, it is important to emphasize that in this context, the safety of principal provided by the deferred annuity exists only if the annuity owner accesses the principal according to the terms of the guarantee. In the context of a GMWB, this means that principal is not guaranteed, unless the annuity owner is willing to extract that principal as a series of periodic payments over a span of many years.
(Excerpted from The Advisor’s Guide to Annuities, 5th ed.)


Your Constructive Comments are Welcome!

You Can't Get Decent Returns Without Risk

This could, or could not, be a myth depending on how we define "decent" and "risk".

My definition of "decent" is a rate of return that exceeds the "risk-free" rate plus inflation.   The risk-free rate is typically the T-bill rate or long-term government bond yield.  The current long-term composite (>10yrs) is 2.12, down from 2.35 a week ago.  The current long term projected inflation rate is 1.9%.  So a ROR of 4.02 would be decent, according to my definition.
Take a look at the private wealth portfolios below, from FTA Wealth Advisors.  The grayed out columns are the benchmark indexes.  Look, for example, at the Foundation Strategy column.  Worst historical drawdown was -9.47%  while the S&P500's was -50.95%!  And since inception- including both recessions -it averaged 6.22% vs. 5.5% for the S&P.  The bottom row shows median monthly returns.   Then take a look at the next chart. 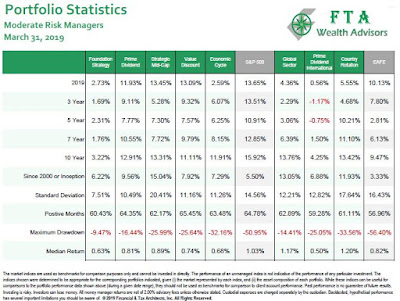 This shows year by year performance.  Wouldn't it have been nice to have made money during the last two recessions instead of losing it and needing almost 10 years to recover? 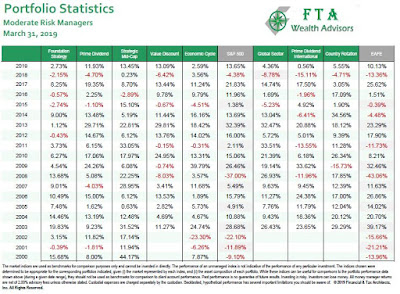 Your Constructive Comments are Welcome!